Munich Franz Josef Strauss Airport is the international passenger airport of the Bavarian state capital of Munich, and with 46.3 million passengers per year is one of the busiest aviation hubs in Europe.

Around 100 airlines connect it with over 200 destinations in approximately 70 countries.

Valerio Catullo Airport in Verona Villafranca is closest to southern South Tyrol and Bolzano. It is approx. 90 minutes’ drive from the airport to Bolzano.

There are flights to Verona from Berlin-Tegel and Cologne as well as Frankfurt and Munich. The budget airline Ryanair also offers flights to and from Verona.

Bergamo Orio al Serio Airport is in the north of Italy at the mid-point between the towns of Bergamo, Milan and Brescia. The third largest airport in the country is predominantly used by budget airlines. Among others, it is served by the budget airline Ryanair, and the Italian airline Air Italy as well as Hungary’s Wizz Air.

Milan Malpensa Airport is the largest of the three international passenger airports around the northern Italian metropolis of Milan and the second largest in the country.

Milan Malpensa Airport is an important international hub with around 100 airlines operating from it. The budget airline Easyjet maintains one of its bases in Terminal 2.

Innsbruck Airport is one of the most important airports in Austria. Over a million passengers are processed there every year. Within Austria there are flights from Innsbruck to Vienna. European cities such as Frankfurt, London and Paris are further important destinations, which, moreover, open up the possibility of flying to more distant destinations not served from Innsbruck Airport itself.

Innsbruck Airport is the home airport of the airlines Austrian Arrows and Tyrolean Jet Services. Another almost 50 airlines regularly fly into Innsbruck Airport. Lufthansa, KLM and Austrian as well as budget airlines such as Easyjet and TUIfly are among these.

Milan Linate Airport is, after Milan Malpensa, the smaller of the two international passenger airports in Italy’s second-largest city.

Treviso Airport is in the north east of Italy and is primarily served by budget airlines. It is sometimes also marketed under the name Venice-Treviso, however the main airport of the nearby city on the lagoon is Venice Marco Polo Airport.

Venice Airport is the international passenger airport of the Italian city of Venice. It was named after the trader and traveller, Marco Polo, and processes around eleven million passengers every year.

Above all there are flights to Italian and European city destinations from Venice using the point to point model. There are long-haul connections to the United States, the United Arab Emirates, Canada and South Korea.

Venice Airport is an important hub for flights towards Eastern Europe. Consequently there are many flight connections to various Eastern European cities and Russia. 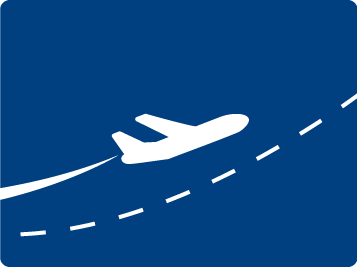